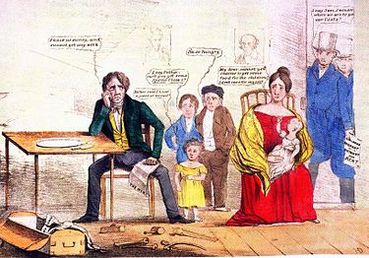 The whole country was affected by this depression. The farmers did have a fruitful harvest in 1837 and that did lessen the pain a little... but not that much during this 6 year period. In two months, almost $100 million was lost in New York alone. Almost half the banks in America closed entirely and  sixty-two banks partially failed.

It has become a pattern that after a period of economic prosperity, a harsh economic downfall follows. In 1834, the national debt was lowered from $124 million to $42 million by the end of the year. Jackson stated that the USA should be debt free by the beginning of 1835. 1835 was a very prosperous year but everything came crashing down in 1836.