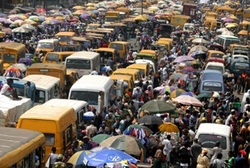 During the period after the Compromise of 1950. The regions in dispute calmed down in state of calmness. During this period, many people in the population began to move into the cities and this movement was called the urbanization. The railroads were constantly being depended on for transportation from one place to another, and by that time, 16% of the population in the United States lived in the cities, while approximately 300,000 Europeans immigrate to the United States annually.

There were many major causes to the Civil War. One of them is slavery, and one of them is economic differences between the two regions. The North was manufacturing while the South was producing raw materials. When the West began to become a land of opportunity, many farmers went all the way to the West in hopes of supporting their families, and the West flourished. Because of their success, the South is now isolated and rejected from the nation. And as the issue of slavery began to grow in large amounts, the South begins with the declaration of war.
The first thing that must be mentioned is that the North is much stronger than the South. The North has more revenue, a more stable economy, and more population. The only better thing the South has against the North is better leadership, and that is proved to be never enough. As more and more people from the South continue to invest in the war economy, the more they are going to lose and the South continues to get pulled back. From that the South is now suffering under financial deficits and it breaks on through with the South's defeat in the Civil War.